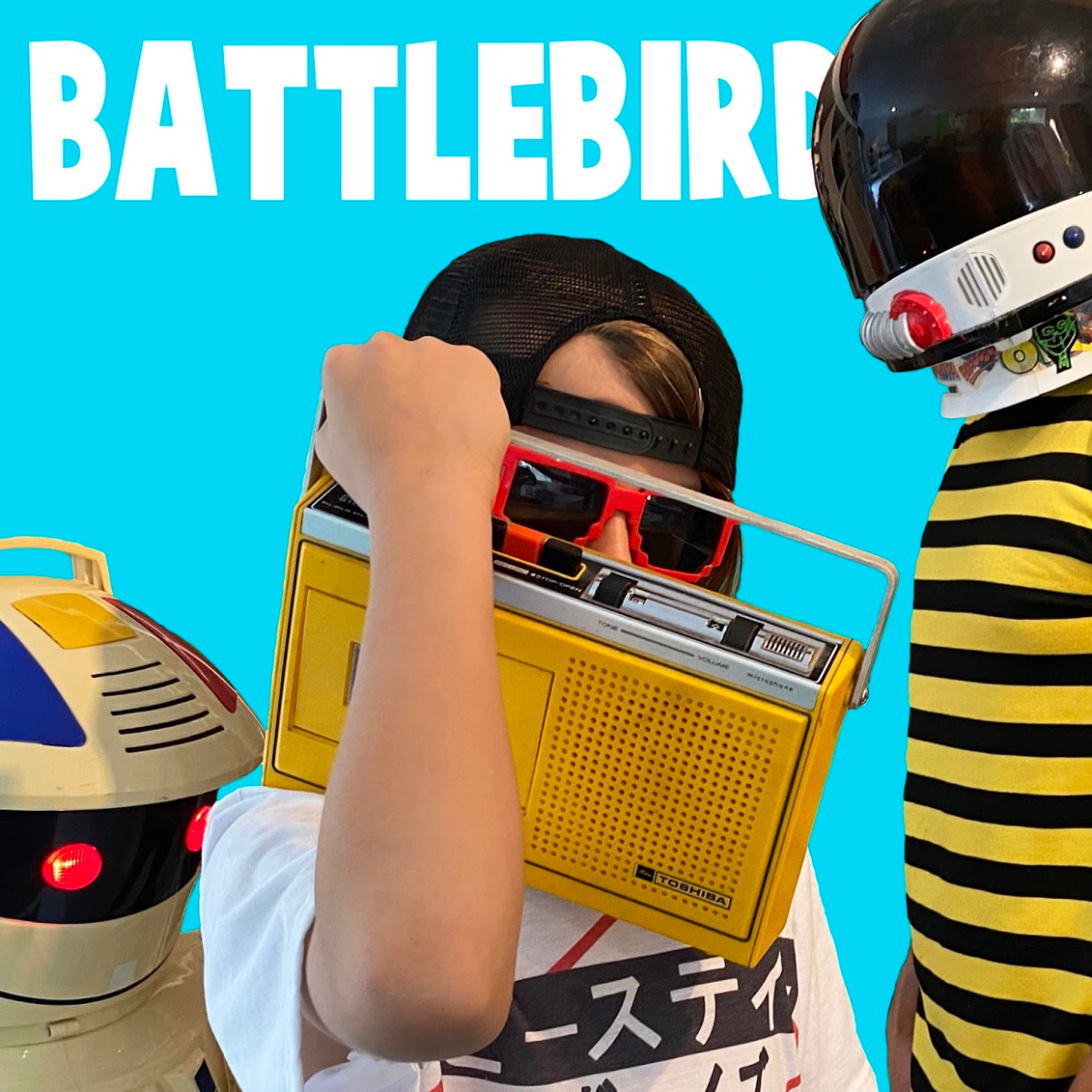 How the Canberra-based father-son music duo battled shyness, with robots and intergalactic beats.

Better known as ‘the galaxy’s finest father + son + robot space-hopping, pop-rocking band’, Battlebird are a father-son duo that we’ve had the pleasure of chatting to in light of their new album release ‘Whatever Together’.

What really struck a chord with us here at Somewhere Between was just how the Canberra-based band formed. Back in 2015, Luke (Dad) noticed Elliot (The Kid, who was then seven years old) was struggling to adjust and make friends at his new school. Luke, having suffered from shyness himself as a kid, knew from experience that music-making could be a great way to build confidence and boost self-esteem.

After a few fun months goofing around in the garage with some old synths, drum machines and recording equipment, the pair knew they were onto a winner. The Battlebird line-up was solidified after finding an 80’s robot at a garage sale, and Battlebird was launched into the stratosphere.

Shyness in children and tweens is incredibly common; though we know it’s something that can be overcome with love, support and in Elliot’s case, a robot or two. We love how Battlebird is an awesome example of how one Dad and his son chose to overcome shyness and fight it, together. As their new album is so aptly named – “Whatever, together!”

Battlebird is an awesome example of how to have fun with your kids and instil them with a sense of confidence all the same time. As Luke told us, the moment it stops being fun for Elliot “is when we’ll drop our mics and call it a day.”

It’s also pretty fabulous to see that the music is aimed toward younger kids and tweens – a group that’s sometimes forgotten in the kids music world! Their new album “Whatever Together” covers some awesome, positive topics, like the importance of supporting each other through both good and tricky times. It’s a solid reminder that, no matter what, we can all tackle whatever together.

We were so pleased to get Luke and Elliot to share their experience with us about how Battlebird helped with Elliot’s shyness and then took them far beyond what they ever expected. As Elliot puts it  – “…You might surprise yourself with all the cool things you can achieve.” 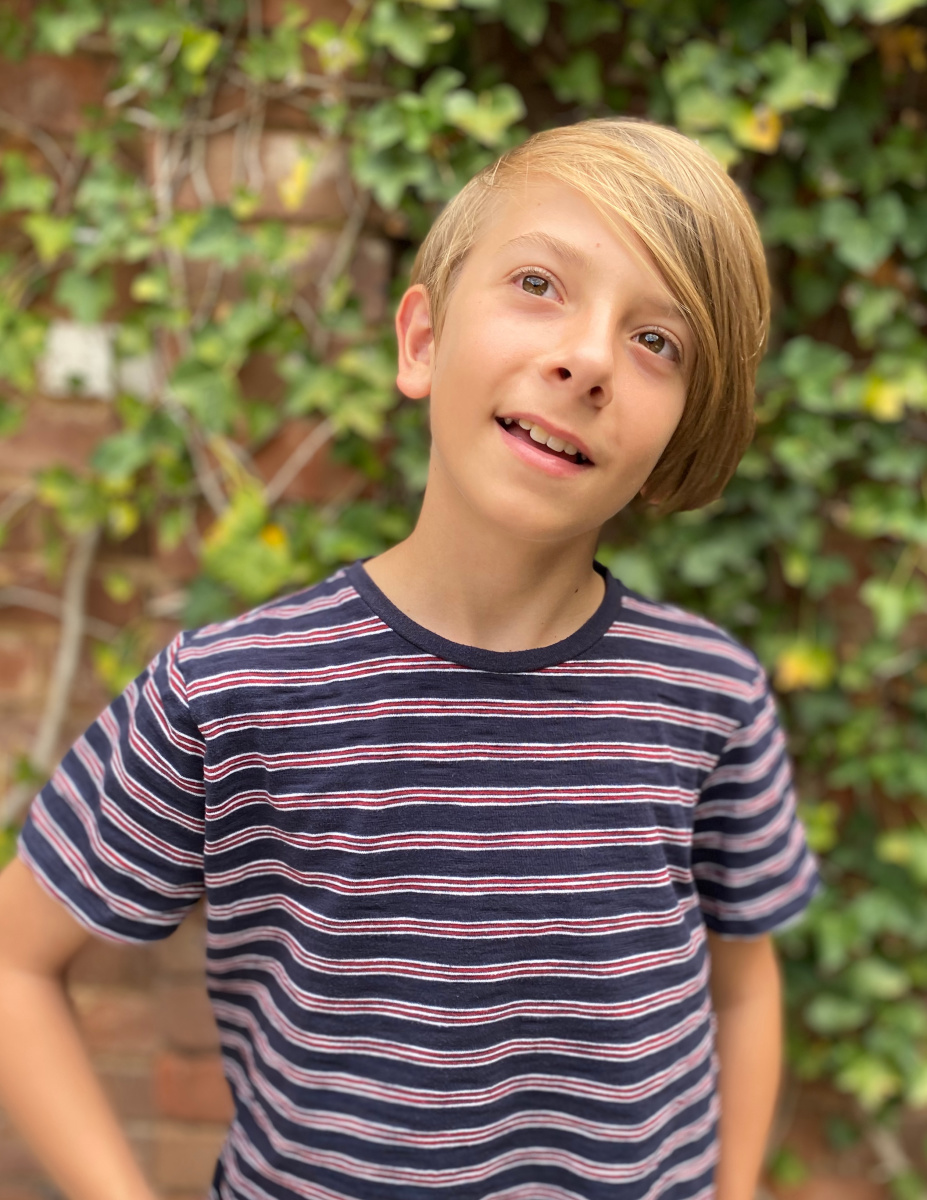 CAN YOU TELL ME A BIT ABOUT WHAT IT WAS LIKE FOR ELLIOT WHEN HE FIRST PICKED UP A MIC?

It all happened quite organically. We’ve always been a pretty musical household, when Elliot was a toddler there were always toy instruments, drum machines and old keyboards scattered around the house which he loved to mess around with. He also used to love belting out tunes in the car from a young age, singing along with whatever was on rotation at the time (Rolling in the Deep was a particular fave). When he was five we found a karaoke machine at an op-shop, it had flashing disco lights and a small TV monitor that he could watch himself in while he rocked the mic… there was absolutely no stopping him after that!

WHAT HAS BEEN ELLIOT’S ULTIMATE “THIS IS SO COOL” MOMENT?

It turns out Elliot’s ultimate “this is SO cool” moment is also the same as mine. On a long-haul Qantas flight, we discovered our debut album ‘Life is Good’ streaming on In-Flight Entertainment alongside kiddy-music heavy-weights Justine Clarke, Yo Gabba Gabba and The Wiggles. Needless to say, we politely asked the flight steward for some cold beverages and raised a toast. Elliot’s other top pick was his VIP tour of the ABC TV studios when he got to meet The Good Game presenters live on set, and we introduced our robot DJ to their robot side-kick. Good times!

THE FIRST BATTLEBIRD BACKYARD CONCERT SOUNDS EPIC, BUT GETTING UP ON STAGE CAN BE SCARY! WHAT WERE SOME STRATEGIES ELLIOT USED TO FEEL CONFIDENT FOR THAT GIG?

It was particularly interesting, and a little surprising, for me to see how comfortable Elliot was on stage from the very start.  The inhibitions and shyness he displayed in social situations at school and in public weren’t so much an issue when he performed in front of an audience. I think the fact that we had practiced and prepared for this concert for a month beforehand while keeping it a fun experience, put Elliot at ease as he knew what was expected of him.

In actual fact, at our first official gig at a festival in Moruya, I was a lot more nervous than Elliot, he sensed this and as we were about to hit the stage to a packed room he put his hand on my knee and assured me “everything will be alright”. He was seven years old at the time, and it is without question my proudest band-related moment.

A month later we were approached by ABC Kids to release an album, they had seen a video of ours on Youtube. Elliot believes that’s how easy getting a record deal is… and maybe it should be when you’re doing it for the right reasons and not trying too hard. This whole experience has definitely taught me some important life lessons as well.

As we were about to hit the stage to a packed room he put his hand on my knee and assured me ‘everything will be alright’.

IT SOUNDS LIKE ELLIOT’S SCHOOL AND NEWFOUND BUDDIES LOVED BATTLEBIRD FROM THE BEGINNING; HOW DID THIS MAKE ELLIOT FEEL?

Elliot’s transformation in the days after the first Battlebird concert in our garage was pretty remarkable. While still a little reserved, I could see a quiet confidence in him at school drop-off the following Monday morning as he chatted and goofed around with his newfound buddies.

Battlebird struck a chord with the kids in Elliot’s Bermagui Year 2 class immediately; robot DJ’s, songs about gelati, pinball and friendship – what’s not to love? Battlebird was invited by his teacher to run some music-making workshops with the class, something he was really proud of, and that definitely helped him overcome his social anxieties.

Elliot formed some super-strong bonds with his classmates in the following months and although we’ve since moved interstate he keeps in regular contact with them. A number of his old class-mates made guest appearances on the new Battlebird album.

I could see a quiet confidence in him at school drop-off the following Monday morning.

AS DAD AND THE GALAXY’S FINEST FATHER, HOW DOES IT FEEL TO SEE ELLIOT ROCK IT ONSTAGE?

Ha, not sure about the galaxy’s finest father, but I’m certain that I couldn’t possibly be any prouder of Elliot (AKA The Kid), whether he’s rockin’ it on stage or off.

Battlebird is just one part of our relationship, albeit a pretty big part, and to have shared this experience with him is, without doubt, one of the greatest things to have happened to me.  For me to take a step back on the new album and let Elliot perform lead vocal duties is another hugely proud moment.

Elliot has recently taken up piano lessons and is already a way better technical musician than me, another thing I take great pride in.

I regularly check in with him to see if he’s still enjoying Battlebird, the moment it stops being fun for him is when we’ll drop our mics and call it a day. Until then we’re having an absolute blast!

I’m certain that I couldn’t possibly be any prouder of Elliot (AKA The Kid), whether he’s rockin’ it on stage or off. 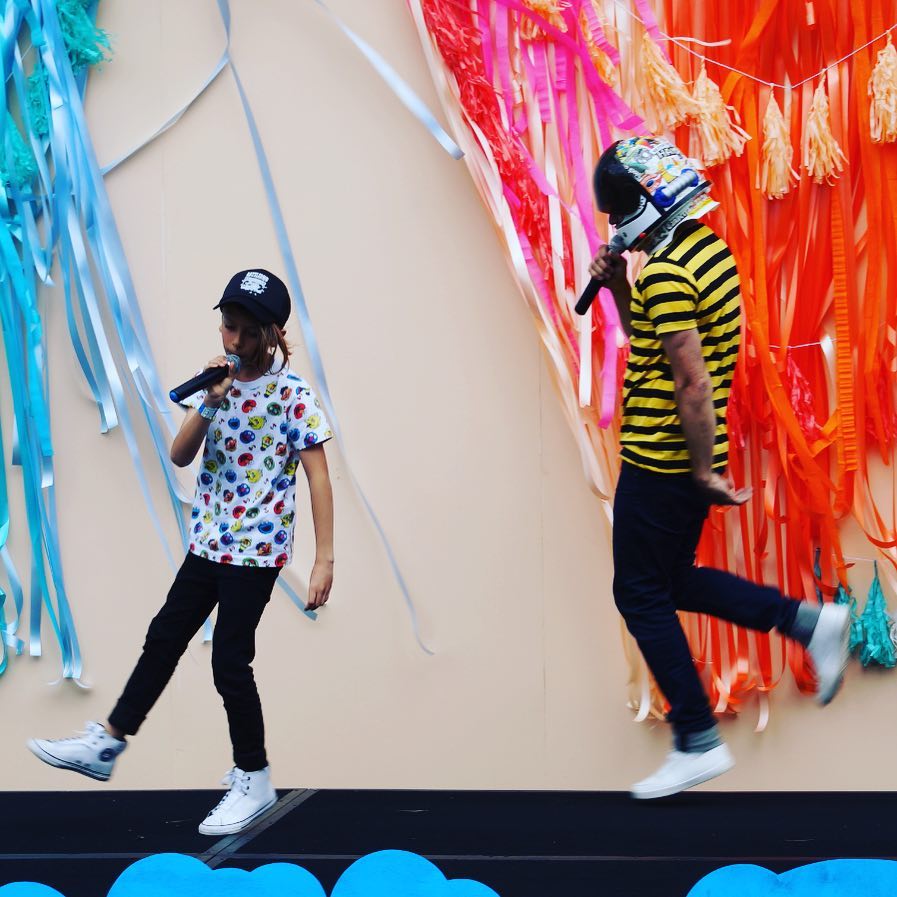 ELLIOT JUST SOUNDS STRAIGHT-UP LIKE A REALLY COOL KID; ON A SCALE OF 1-INFINITY, HOW BLIMMIN’ PROUD ARE YOU DAD?

What’s beyond infinity? Ha, we’re going to need a bigger scale people! In all seriousness, I couldn’t be any prouder of him, not just with what he’s achieved with Battlebird, but in the kind, respectful, inquisitive teenager he’s become.

Yes he is very cool (I have a lot to learn from him), but more importantly he is incredibly empathetic to other kids who he sees struggling with anxieties and shyness as he did when he was younger and/or have been the victims of bullying. His Year 5 primary-school teacher awarded Elliot the Aussie Award Medal for, amongst other things, his “crusade on social injustice. ” That was a serious proud dad moment.

WHAT ADVICE WOULD ELLIOT GIVE TO OTHER KIDS WHO FEEL A BIT SHY AT SCHOOL?

“Remember that things will change, even though it feels like they never will at the time… be kind to people and 99% of the time they’ll be kind back, the ones that aren’t are usually dealing with their own problems at home or school. Try different things even if it makes you feel a little uncomfortable, you might surprise yourself with all the cool things you can achieve…”

FOR OTHER PARENTS OUT THERE (WHO ARE PERHAPS LACKING YOUR ROBOTIC, INTERGALACTIC MUSIC SKILLS), WHAT ARE SOME WAYS THEY CAN GET ON BOARD WITH GIVING THEIR KIDS A CONFIDENCE BOOST?

I think it’s so important to not be afraid to get silly with your kids, be enthusiastic and just experiment with anything and everything your kid shows an interest in.

There’s so many great, fun music-making apps out there that you don’t have to be super musically skilled (trust me I’m not) to create awesome projects. If your child is into art or photography why not put on an ‘art show’ for family and friends. Or if cooking is their thing create a ‘pop-up’ cafe in your dining-room for the neighbours.

Offer plenty of encouragement and let them know it’s ok to make mistakes, everyone does, and that they’ll learn from them. Life can be pretty heavy, 2020 hasn’t had the greatest of starts… the real key to hanging out with your kid ‘working’ on cool projects is to have fun with it!

Battlebird’s brand new album is ready to blast in your speakers. Check out “Whatever Together”, in true Battlebird style celebrating friendship, family, love and rockets. No matter what, we can all face whatever together.

Check out Battlebird on Insta and their new album here. 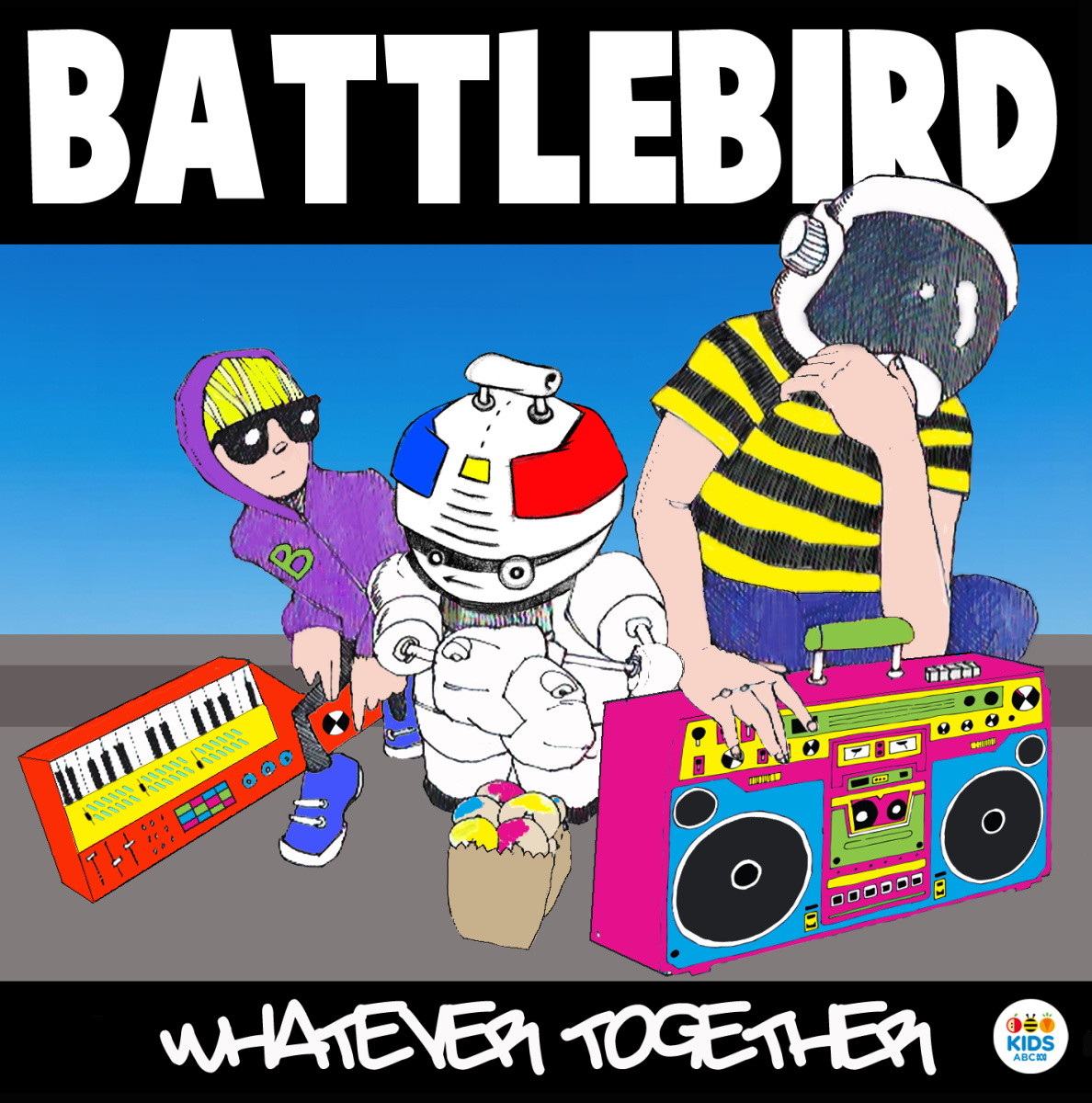 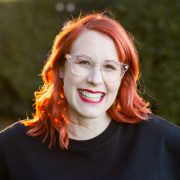 Rachel. Mother of 2; one too-cool tween and one wee babe. Owner and chief writer at Frankly Write. Self-proclaimed nerd, lover of Married At First Sight, enjoys a touch of yoga, a good book and cooking for the fam.

Ten Inspiring Movies to Watch with Your Tweens

Don't want to send the kids back to school?